This isn't 'playing politics,' governor, we're trying to save lives 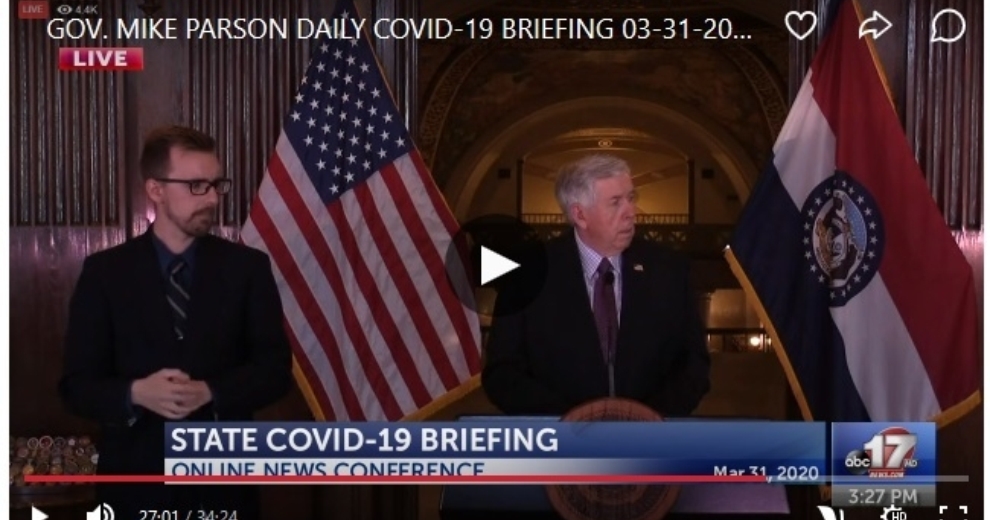 Gov. Mike Parson said something at a press conference early last week that has stuck in my craw since I first heard it.

He was asked why he hadn’t issued a stay-at-home order similar to the ones in Missouri’s largest counties.

During this press conference, which was before Parson did finally give an order, the questioner pointed out that Auditor Nicole Galloway was among the folks calling on the governor to do so. Galloway is the only Democrat in statewide office and the party’s likely nominee to challenge Parson in November.

“The state auditor needs to worry about being the state auditor right now,” Parson replied. “All of us elected officials right now need to have one thing in mind: What can we do to help with the Covid-19 situation?”

That’s condescending and dismissive, but the next part is why I’ve been clenching my jaw for the past week.

“This is not the time to … play politics out of this issue and try to figure out who gets one up … There’ll be plenty of time for that down the road. Plenty of time.”

Our governor has spent so much time surrounded by a supermajority that he’s apparently forgotten how democracy actually works.

I’m not saying this as a Democrat, or even as a candidate.

When we disagree with what the government is doing, we speak up.

When we believe lives will be lost because of the governor’s inaction, we get loud.

How far down the road should we wait before we begin to question you, governor? Before or after more people die?

He said it a week ago and has since given a stay-at-home order, so why am I bothering to go on a diatribe now?

Because the stay-at-home order that he dithered on for so long leaves so many exceptions that it doesn’t actually do much.

Governor, saying you’re doing something and then not actually doing that thing is playing politics.

Ignoring advice from the front lines because you’re worried how it will play in some parts of the state is playing politics.

A state wide stay-at-home order is the right decision, but I understand it’s not a simple one.

And it’s easy for me to advocate as I sit in the office of my “essential” job and the only person I see is my mail carrier.

But Parson’s rationale is that rural areas aren’t as equipped to cope with a full-on order the way urban counties are.

I’m not sure what kind of snowflakes Parson thinks live in rural Missouri, but I’m pretty sure the folks I grew up with could handle it at least as well as the folks in Greene County.

And if the governor is really worried about how the infrastructure in rural Missouri could handle a shut down, maybe his party should have passed Medicaid expansion at some time in the past decade, or made broadband Internet access a priority.

One of the scariest things about this virus is how easy it is to spread before you even know you have it.

That means everyone — rural, urban and suburban alike — has to limit contact with others as much as possible. A stay-at-home order — a real one — helps delay the peak until we have the tools to beat this thing.

But that requires more leadership than we’re apparently going to get from our current governor.